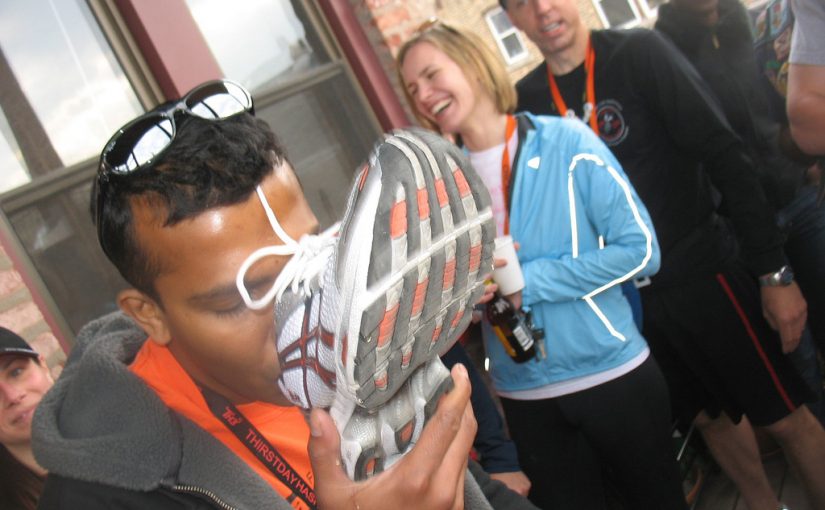 Lower Wackoff and Meister will attempt to not get arrested for anthrax as they lay trail in and around the spankin’ new virgin Millenium Park. If you’re good you will get to see the Mega-Bean. In addition to spectacular trail, the bar features cheap beer, beer garden, good eats, and FREE PARKING. In the spirit of the annual Beach Party theme, wear a Hawaiian style shirt or something beachy-touristy. Those who don’t will get a lame, stupid-looking straw beach hat for the trail.
Getting there: Located at the old golf course off the northeast corner of Randolph and Columbus. The Lake Street L stop of the Green/Brown/Orange/Purple lines is closest. Walk east 3-4 blocks on Randolph and follow the following:

Stairs: Take stairs two flights to Lowest Wacker from Randolph/Columbus and go one block north to the old golf course. It’s inside the one story structure. For the lazy, there is an elevator on Upper Columbus next to the fire house, off of Water.

Drive from Michigan Ave: Randolph East to Columbus, then Left (North). Turn left on the ramp going down (Water St). At the end of the ramp, make a U turn left. Turn right at the stop sign and the parking lot is on the right.

Drive from North LSD: LSD to Grand/Illinois/Wacker. Wacker veers right, then move to left lane. Turn left on Columbus Drive. At the next stop light , turn right down the middle ramp, E South Water St. At the end of the ramp, make a U turn left. If you’ve been paying attention, you know the rest.

Drive from South LSD: Similar to above, without the veering, I think.

If you are coming from the Kennedy, there is another set of instructions. E-mail Meister at chicagohhh@interaccess.com. My fingers are getting tired.