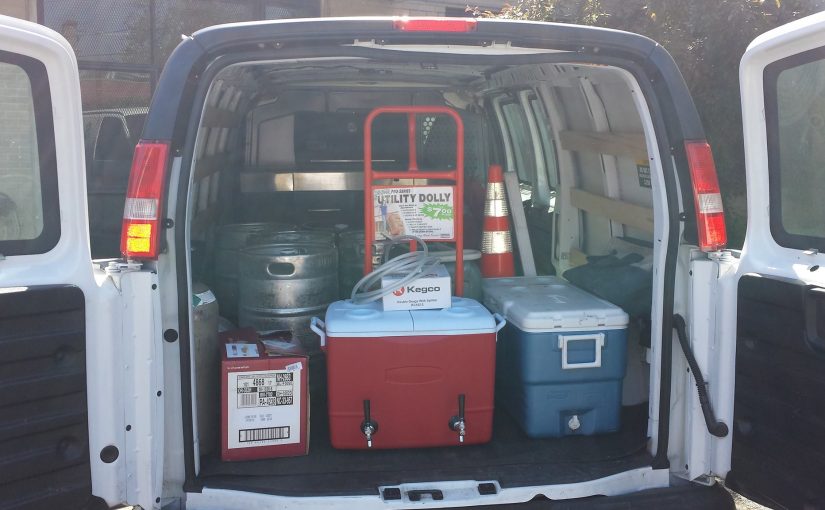 More than an hour into their run, 11 members of the Chicago Hash House Harriers are gathered around a picnic table in a Beverly back yard throwing back Miller Lite.
Eric Oliver, a Chicago police officer and the “hash” host, quiets the crew to dole out trail tips before the second half of the weekly romp.
“There’s a spot up here you can’t shortcut,” he says. “It’s not dangerous, but no skipping.”
When the cans are emptied, the runners — “hounds” — set off to follow the chalk symbols marking the Chicago neighborhood’s sidewalks, trees and railroad tracks.
A bit more sluggish than before the beer stop, the hounds slow down when they reach the northwest corner of Beverly Park. The arrows point over a fence and through a sprinkler.
“Anything that’s not a war zone is considered acceptable,” said Bill Wojtas, who is known as “Rearloader” because he piles cargo onto airplanes.
Wojtas and the other pack leaders jump the metal barricade and get a welcome shower on a sticky night.
Then a 29-year-old photographer from Chicago’s North Side Lakeview neighborhood takes the slick surface at full speed, loses her footing and lands on her face. Stunned, she stands up and blood oozes from her mouth and lips.
“I’m OK, really,” she says to the concerned pack as she moves in the direction of the end-of-trail party.
“If she thinks she’s all right, she’s all right,” says Tom Leeds of Oak Lawn. “Hashers are troopers. We’ll talk about that for the next few months.”
Welcome to the weird world of hashing, an international phenomenon that’s jokingly described as “a drinking club for those with a running problem.”
Hashing traces its origins to the late 1930s, when the British occupied Malaysia and a group of runners modified the old English school game of hares and hounds.
The story goes that a group of expatriates looking to hasten their hangover recovery from the weekend would meet on a Monday to run it off. An enterprising pub owner started meeting them at the end of their runs with beer in his car trunk, which gave birth to the idea of combining the two activities, according to Jay “Hops” Hopkins, editor of Half-Mind Catalog, an Internet hashing magazine.
There are two types of hashes: live hare and dead hare. In live hare, the hare sets out just before the hounds.
The hash through Beverly was a dead hare because Oliver set the trail — which weaved through alleys, around a cemetery and over the Rockwell Street train tracks — ahead of time. The goal is to follow the symbols to the beer, avoiding those signs that lead to false trails.
While beer figures strongly in hashing, camaraderie is the real draw.
Just ask Amy Kozy. The 29-year-old started two years ago at her boyfriend’s recommendation.
“He’s not in my life anymore but this stuck,” she said. “I like this group more than I liked him.”
For Oliver, hashing reunited him with a high school crush. While a sophomore at Mount Carmel High School, Oliver went on a blind date with Maura Lux to a St. Ignatius turnabout dance.
“He ditched me,” said Lux, a 32-year-old flight attendant.
“I should’ve told the story,” Oliver said, laughing.
“Seriously, we were 15 and didn’t have driver’s licenses,” she said. “He went south and I went north on the Halsted Street bus home.”
They never saw each other again until they met at a hash four months ago. Distance is no longer a factor.
The drive to the Beverly did prevent a large turnout for Oliver’s hash, only the second on the South Side this year.
Wojtas, who lives “as far north as you can go and still be in the city,” pretended to be surprised that Oliver had indoor plumbing.
“Very funny,” Oliver replied. “It’s the South Side, but we don’t have outhouses.”
There are three “kennels” in the Chicago area, one of which caters to suburban hounds, but hashing doesn’t have the prominence on the South Side that it does on the North Side.
“There are family-friendly hashes and college-frat party ones. We’re kinda in the middle,” said Wojtas, who started hashing while in Japan with the Marine Corps.
Athleticism isn’t a requirement, but determination is. Oliver said he enjoys running, but the drinking aspect keeps him hooked.
“It’s like one step up and two steps back,” he said.
The group is fiercely noncompetitive, so anything goes. Chugging is required for the leaders as well as those who bring up the rear.
Solange Zangiacomo has been hashing on and off for five years and has proudly never come in first.
“I hate running,” she said. “I’m the kind of harriet who walks more than runs.”
Horn-E is a 19-year veteran with some 1,300 runs under his sweatband and at least that many hashing stories to tell.
“I’ll run anywhere there’s a hash,” he said. “(Hashing) is a chance to let your hair down once a week and get away from the rigors of the world.”
Horn-E declined to give his name because he’s known in hashing circles only by his given nickname.
From now on, the photographer who slipped in the sprinkler will be known only as “Bloody Lips.” After the hash, between bawdy songs and drinking beer (known as a “down-down”), the hounds held a naming ceremony.
“We normally sprinkle you with beer to christen you, but we won’t do that since you’re going to the hospital,” says Michael Bendas of Bridgeport, the group’s religious advisor. “You will do a down-down next time.”
Somehow, through a swollen mouth, Bloody Lips says, “Here, here!”
For more information, visit chicagohash.com or the Half-Mind Catalog at www.half-mind.com.
The Associated Press contributed to this report.
Courtney Greve may be reached at cgreve@… or (708) 633-5983.
© 2004 Associated Press — All rights reserved. This material may not be published, broadcast, rewritten or redistributed