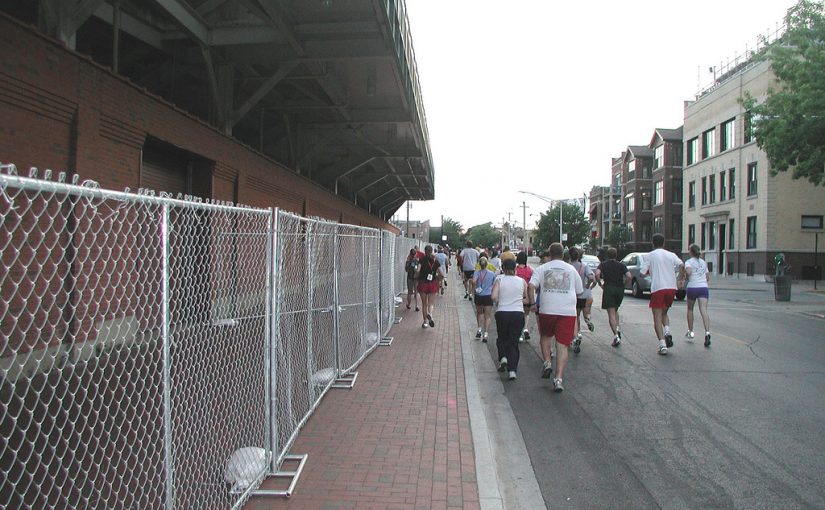 The trail started from Hi-Tops in the Wrigleyville area on a sunny Saturday afternoon. We welcomed BRRRR our hasher from Texas to the Chicago Hash again. PARDON MY FLAPS brought a virgin named JUST ROB to run with us as well. After a quick chalk talk by ITS TOO SOFT the pack was off. EZ ON THE ASS carried the CH3 colors today and came very close to his most favorite place in Chicago Wrigley Field. HAPPY ASS GRABBER found the trail and it circled back around Wrigley thru the usually car wash area west of the field. CAN�T BEAT and I found picked up the scent and we ran down Clark making a right at Sluggers and here the trail went back North. The FRB�s were able to call back to CP and CUMS IN MY ASSFAULT to shortcut the trail. FURBURGER caught up to HAPPY and I and we went north to Clark and Grace where we found our first check of the day. FURBURGER not used to being and FRB check hanged and the pack caught up to the FRB�s.
The trail went west again and was picked up by PUKE SUIT RIOT and SINGLEWIDE MOBILE HOME. JUST ROB looked like he was having fun on trail but it was rather long and straight for a CH3 hare. The pack kept heading west and hashers like ARE THEY REAL and SAN FRANCISCO TREAT plodded along to the beer stop. Which was near the corner of Lincoln and Newport. Champagne and beer were served along with sparklers. The hash celebrated the last hash of the year by waving their sparklers around. After a few beers the pack filtered back to Hi-Tops. CAVIN KLEIN and BATTERIES NOT INCLUDED were waiting for us back there and soon the circle was made. We made 3-RING SPERM KISS the visiting GM from Waukesha drink a down down. And who can forget BUSHWACKER and HORN-E who also made out for the hash today. After about 15 minutes of the circle BONER, SMELL THIS, and HUMPTY DUMPTY arrived throwing the circle into utter chaos. Hopefully we will see you at the TH3 hash, which promises to
be an experience.