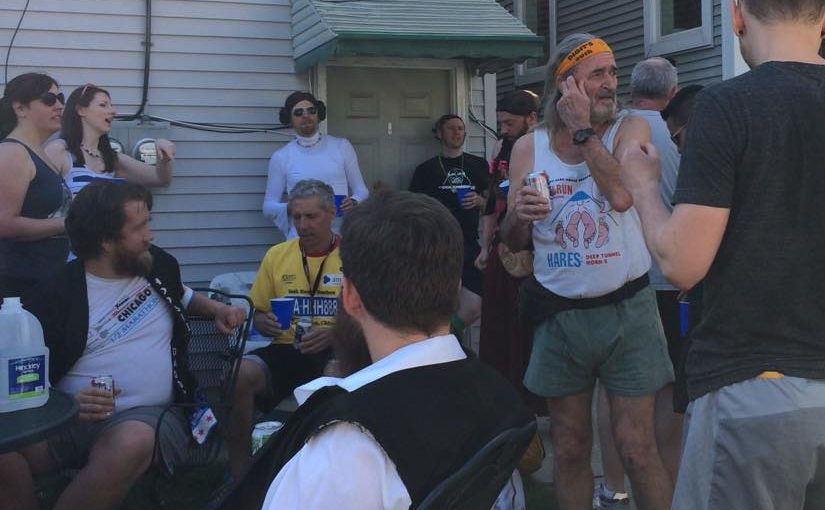 Well I guess you can call this the trail of additions because by the end of the circle we had twenty hashers present either for the trail or drinking at the bar. We also had to use one of our hashers in her official capacity of VET, more on this later. The trail started of in a queer manner because PETERBILT showed up before trail? and then took off to watch the football games. I wish I could have done that because there was some great games played that day. REAR LOADER gave us a chalk talk and SUGAR NIPPLES gave me JUST GUNNER to run with. Lets see hash flag or GUNNER next time I will run with the flag. The weather prediction of rain for the day turned out to be false and we had 40-degree weather to hash in with no rain. VIRTUALLY HUNG got a down for the great weather by MOUTHFUL OF MEAT for this. The trail went north and followed the el-tracks for 1/4 of a mile and then went back east. LIFA and MAGNETIC MUFF found a check on a six-way corner and were mislead by the
hare so they had to come back south. The latecomers of BONER MALFUNCTION, TWO TICKETS TO A PAIR THIGHS, and T-FRIDGE soon joined us on trail.

It seemed that the pack was being lead by our visitors from SIN CITY, SERVING SEAMEN and SOGGY SPARKS. These two had some fun and they bought haberdashery too. Soon the pack traveled down Montrose to the lakefront and there the pack hit a check that GUNNER the dog sniffed out. MAGNETIC MUFF took over FRB duties with MOUTHFUL OF MEAT. They along with FLYING HOOTERS lead us into the beer stop, which was provided by NUTTIN BITCH and JUST MARK her man. Deep in the bowels of the beer stop JUST GUNNER ate the big blue mint, which turned out to be rat poison left to kill unwanted hashers. The pack placed a call to CP who advised SUGAR NIPPLES to feed the dog hydrogen peroxide to get GUNNER to vomit. I asked why not use beer because it seems to work that way for the hash? We all do hope that JUST GUNNER is ok and can hash another day!!

The pack warmed up and drank their beers. Many of the older hashers remembered that we used to use the basement of NUTTIN for circles in the past. We also got her to promise she would be back once a month to hash with us because we do miss her. The pack took off and made it back to the HOLIDAY CLUB where we took advantage of the food but more importantly the $5 pitchers. VIRTUALLY HUNG ran the circle. We called in REARLOADER for allowing a hasher to eat the big blue mint. The pack also serenaded our visitors who claimed they had a good time. But the talk of the night was the arrival of the girls from Wisconsin. Those of you that left early missed the arrival NUCLEAR, NACHO CHEESE, and JUST LAURA. They were soon dancing on tables and collecting dollars from bar patrons. Man do those girls form the North know how to party. Around 7 pm the hash broke up and I plus the girls of the north meet up with SHAVE MY WIFE PLEASE too watch the gophers vs. badgers hockey game.
I guess they stayed out til the bar closed 2 am what are hashers for?