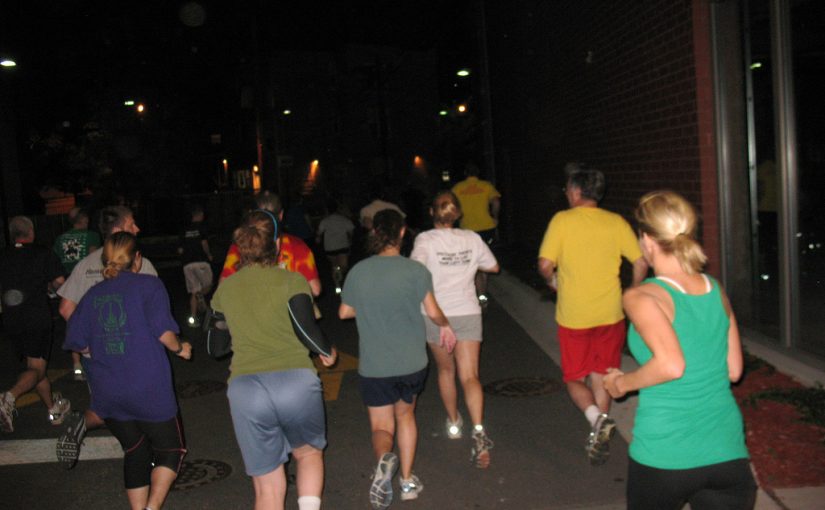 The Third Anal Memorial Day Hash. What a crowd. I counted about 55 at the start. To bad they won’t return after that marathon. I told Smell This I would give him shit for setting such a long trail on his bike. It measured 7 miles, north south, east west, without all of the Zig Zag that is part of every hash. Over 8 easily. We had a bunch of virgins too. I hope when they get back to Detroit they get treated better by BDH3. That was the shittiest trail of the year. Even Serigne, Our visitor from Senegal in Africa, couldn’t handle the hottest marathon in Chicago’s history. The only one who seemed to love it was Bank Of Spermerica who was running with our flag and looked like he was running to actually win the race. Race?????

Actually, it was a lot longer then most of us wanted or looked forward too, but a good part of the trail was decently laid and well marked. Thanks to the hares and hosts and cooks, Smell This, Calvin Klein, Virgin Banger, Rent A Virgin, and Peterbilt. And thanks for the 30 T-Shirts given to the first 31 hashers.

From the start we headed north to a check. Chicken Stiffer went west and wasn’t seen for some time. Lifa picked up on the trail to the north and into Rosehill Cemetary with me running right behind him followed by this huge pack of hounds. We wound our way all over the cemetary Lifa and Bank Of Spermerica leading the way. We exited to the north and there was more cemetery. Lifa went in and a bunch of hashers went west. Were we On? No one called out. But finally an On call came and we were off, around this other cemetery. Lifa got lucky here and climbed a fence and was back near the front. We wandered north to Warren Park. This was a short loop into the park and then we were off to the west. Having been near the front, I was starting to fall back about here. Lifa, yes Lifa was dying too. He partied late at the Big Dog Hash and then was up at 4AM for the 5000 mile bike the drive in the rain. He finally had it. Sir Poops A Lot also had it and Special Ed Giver was leaving him behind. There were a lot of us just plodding along as we ran west to Kedzie. From here is was almost straight south for 2 miles through this river front park. Turns? Only because the path through the park weaned back and forth. All right. They took us over for one block into the city streets and back to the park. Meanwhile Just Carrie and Serigne and a few others were crawling from one water station to another. Finally we saw the beer stop in the distance. I took a head count as I downed a water. About 26 runners with those that drove over with the beer. That accounts for Its Too Soft. Camera at the ready, back pack, no sweat. That is as in no sweat from running in all that heat. But where was the rest of the pack.

But we all had to circle up as Smell This started us off in Duck Duck Goose. Silly fun and we all loosened up a bit. I think that and the beer saved them from the noose that several hashers were weaving behind that tree. Finally after over fifteen minutes of that nonsense, the rest of the pack started to arrive. Weary, but smiling at the sight of beer.

We were soon off to the second beer stop. Yes, we still had to run on. A bunch of us tried to run and died after a block and walked to the beer stop. Another mile plus. And when I got there, there was no more beer. Of course there wasn’t much in the way of beer. All of the cans said Lite. We just ran over eight miles and they are trying to conserve on the calories we were drinking. It doesn’t taste great no matter what they tell you on television. Smell This was trying to organize a game of Izzy Dizzy. I saw Just Lori and a virgin Just Kim walking up. They arrived late, ran through the cemetery, gave up, went back through the cemetery and had to climb a fence were Just Lori managed to fall on her great looking ass.

From here it was On In to the Virgin Abode. We tapped two of the three kegs of Goose Island Beer. Way to go hares. After about a half hour our RA called the circle together for some down downs. Many deserved for the hares for their Marathon course. The virgins, I hope I got this right, Just Debra, Kim, Ryan, Samantha, Harris, Dave, Tim, Gerry, Mike, Lauren. And there were visitors, Sperm Burp, Serigne, and Just Mona. Just Lew got one for saying he shouldn’t have run that 8 miles that morning. No shit. Stab ’em and Slab ’em, Mudsucker, Lifa, Nuttin Bitch for biking the drive. Two Tickets To Pair Of Thighs for escorting a bunch of virgins on a walking tour around the whole of the north side of Chicago. That and her broken collar bone. After the circle we ate. Good Peterbilt food, ribs, brisket, beans that were so strong that I couldn’t sit at my computer last night and live to see the dawn. We played some more Smell This games and Man O’Whore and Sweaty Nipples (yeah, she came back), won for being better at sucking off a banana and sucking out a taco quicker than anyone. Young kids. Don’t they know they are supposed to linger over those things? Doc Cum was back from Paris. Hand Solo came in from Waukesha. Ass Pocket returned. And the longest missing hashers of all, Ann Slanders and Necrophiliac, returned to drink with us. Now if we can only get them back out running again. We finally ended up in song with some Yogi Bear and Jesus can’t hash. Two Tickets To Pair Of Thighs and Just Kim were mesmerized and excited by spot lights and sarongs and Calvin Klein was walking around in green Kilts. Batteries Not Included beat everybody at sucking beer through a straw. Peterbilt prempted Mouthful Of Meat for another lame accusation before she even started. More runners that showed included Hooked On Tonics, Cunt N Pasties, Boner Malfunction, EZ On The Ass, Gag Reflex, Just Stephen, Just Peter, Or G, Cum In My Ass Fault, Princess Labia, Virtually Hung, Just Amy, Just Kelly, To Loose To Screw, Mount Schwinga, Canned Pussy, & Ernst Cumingway. Some hash groupies included Blue Balls, Rhotan, Red Snapper, & Hot Pants.

A killer marathon Hash and a damn good On In.