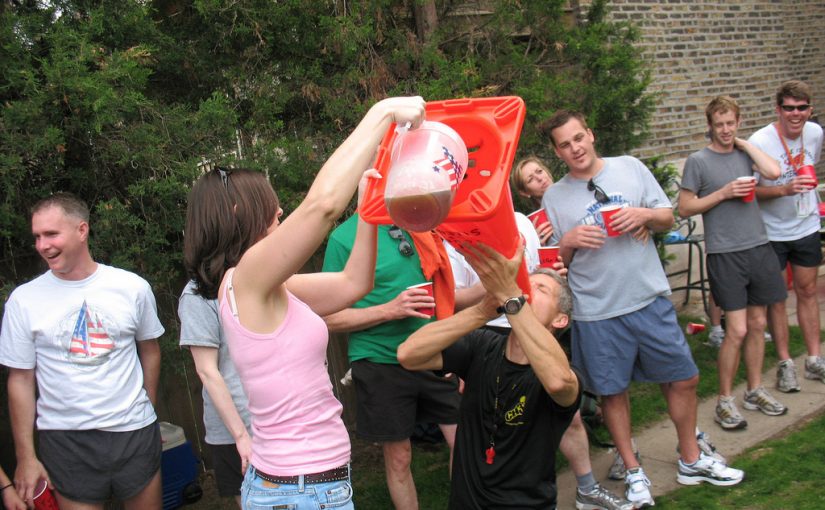 This was another nice turnout for the Chicago Hash. We had 45 people show up and be counted for JUST CHRIS and JUST CARRIE’s virgin hare trail. The hash was billed as one you do not want to miss because of a very cool beer stop. I got back with my co-hares at 6:50 pm and again there were already 10 hashers waiting in anticipation of this fine trail. I took my seat and began collecting money from hashers like EZ on the ASS, PRINCESS LABIA, BLOODY THIGHS, SEX LUTHOR, and CP. I must say thank you for all of you who come up and pay me without having to ask for your money. Collecting hash cash is a thankless job for whomever does it and you people make it easy for me because I rarely have to ask anyone for his or her money. Many Hashers saw that Wrigley was under construction for the upcoming Police concert this weekend and JUST CHRIS even said wouldn’t it be cool to have circle in the Outfield since he doors were open? Nice try but security I think would have had an issue with that. The hash began at 7:35 and 30 seconds and I was happy to see CALVIN and BATTERIES show up right at the start. Thi meant I would have someone to run circle for this large group. The chalk talk commenced and we used all the standard marks for this hash because we had virgin hares that needed to learn the marks for trail. The pack was off going west down Waveland and stopped traffic at Clark. HORN-E I believe found the first mark after the split. Wankers like VIRTUALLY HUNG and SMELLY CONCHA were already far behind. The back of the pack included JUST KELLY, PACKERHER ARSE, CP, JUST CHUCK, and JUST JENN. I was sweeping so I barely saw anyone and gave these people a Short cut to the Beer stop at JUST CHRIS’S place. Hashers like HOOKAH HOOKAH BURNING LOVE, VIRTUALLY HUNG, SEX LUTHOR, and JUST JOHN took the eagle trail. Other hashers like MOUTHFUL OF MEAT, BLOODY THIGHS, and STUMP HUMPER took the turkey (chicken?) trail.

The Beer stop was at 3100 North Lake Shore Drive and was on the 21st floor of the building overlooking he lake. We have early confirmation that many people perceived this to be in the running for the best beer stop of the year!! We were up there for 10 minutes when JUST CARRIE arrived with the back of the pack and BATTERIES, SPOTTED COCK, ERNEST CUMMINGWAY, and others got to partake of beer and of the awesome view. See the pictures located at http://www.chicagohash.com/ to get my meaning. The hash after 20 minutes went back to the bar but not before PACKHER ARSE played with some knob like boobs on the way down the elevator. SMELLY CONCHA being the racist he is took the stairs all the way down!!! The trail went through boys town on the way back and the streets were packed with people on this beautiful night. BANK OF SPERMAMERICA almost became road kill crossing Broadway and heading west. We got back to the bar and were greeted by some non-runners, SMELL THIS, PETERBILT, HOT PANTS, CUNT AND PASTIES, and ITS TOO SOFT we are still glad to have you show even though you do not run. Our Bartender Katie poured us numerous pitchers of beer and CALVIN began the traditional circle. Punishment was handed out to the hares but I think the circle loved the beer stop!! So we were not hurt to badly.

STUMP HUMPER, VIRGIN BANGER, SPOTTED COCK, and HOOKAH were nailed for being reboots. We also welcomed our virgins: JUST HEATHER, JUST PITT, JUST CHRIS, JUST CHUCK, JUST JENN, JUS KATIE, JUST KAREN to the hash and judging by the comments it sounds like many are going to return next week. We also were happy to see the previous weeks virgins JUST JOHN, JUST KRIS, JUST LESLIE, and JUST COLLEN come back and hash again for free!! Remember folks your 2nd hash is free at the CH3. We also meet Just Kris and CORN on the COCK who were visiting from DC. CALVIN soon closed the circle and many went on their way. If you did stay you got to see JUST KELLY named. Due to a comment on trail about a gash she had on her foot and it hurting because of the sweat, she has been named A SALTED
GASH!! See you all next week you wanks!!

Remember also 1500th hash on JULY 21st is fast approaching so pay up you
wankers!