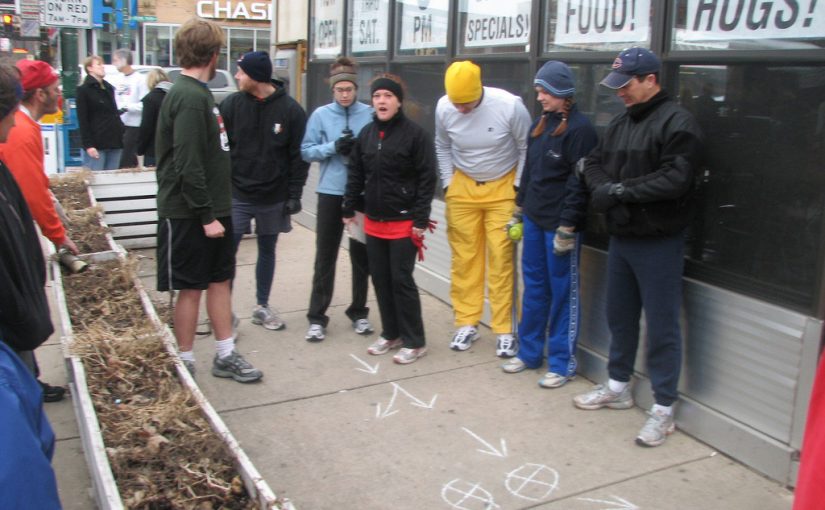 For those whose whose travel plans make it difficult or impossible
to trek out into the woods, Kenosha is offering an officially-
sanctioned City hangover hash very close to the hash hotels.

As many visitors are coming in on the Megabus and thus won’t have
cars so getting way out to woods in the burbs is difficult or
impossible (or locals who are just too damn hungover to schlep all
the way out to Morton Grove), there will be a “city hangover hash
option” offered Sunday morning for those still with game. People who
prefer to run in the shiggy and woods are encourged to go to Morton
Grove if they want to, as this trail will be a short romp through
upscale and urban “Beverly Hills 60614”.

Join the Kenosha HHH for a mercifully short trail through the Far
Southern Suburbs of Kenosha (Lincoln Park in Chicago) with one beer
stop and brunch at the on-in. For those who have some time to kill
before their bus or just want to enjoy a nice sunny Sunday afternoon
we will probably setup the HDTV on the rooftop and put on the White
Sox/Red Sox game. Feel free to stay and hangout and of course drink
a few beers.

Those just simply too hungover from two consecutive days of full-
throttle partying to actually run trail can just join us on the
Skydeck for the on-in beers & brunch. Pack should be back in by noon
or 12:15 – A-A trail. We will try and arrange shuttles to Union
Station if anyone can still drive.

Directions from downtown Kenosha – Sheridan Rd. South to Hwy 50
(75th St.). East on Hwy 50 to I-94. East (South) on I-94 to downtown
Chicago. Exit 45A California and turn right (South) onto California.
Next stop & go light will be Diversey. Turn left East on Diversey
and go 2-1/2 miles East to Sheffield. Turn left (North) on Sheffield
to Wolfram, turn right (East on Wolfram). 933 is first building East
of the L tracks, South side of the street. Pray you find parking
somewhere.

Public Transportation – Metra Union Pacific North 8:49 Kenosha train
arrives Union Station 10:30. RUN East to LaSalle and North to Lake
(you don’t have time to ride the Brown Line all the way around the
loop so don’t board at Wells!). Take Brown Line at Lake to Fullerton
and RUN North to Wolfram. You have 1/2 hour to do all of this before
the hash leaves at 11am or take the ungodly early 6:57 am Metra
which gets in 8:25 and take a nap on the train.