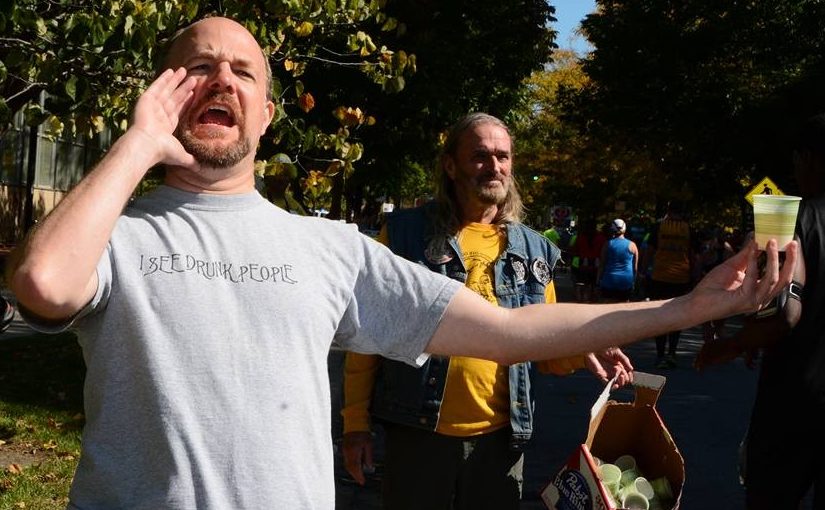 Sunday morning found the crew brutally hungover but many still
wanting one last hurrah. My living room looked like Jonestown Guyana
the day after they drank the Kool Aid, as it was littered with fallen
hashers. Yet we were blessed with a third consecutive day of
unseasonably awesome weather (thus guaranteeing the RA nearly
limitless down-downs) which found a pack of just over 20 runners
joined by several latecomers gathered at Party Central for one last
go. The pack was almost all visitors as Chicago hashers pretty much
said “I’m tired, hungover, generally feel like ass and I LIVE HERE so
feck it – I can run around Fuji’s place in Lincoln Park anytime, so
I’m just gonna SLEEP IN”. Fair enough. After they stowed their bags
on the third floor deck which by that time was starting to look like
baggage claim at O’Hare during Thanksgiving the pack gathered in
alley between Diversey & Wolfram.

Chalk talk was led by GM Chicken Stiffer while Sin City’s own Fluffer
hurridly set trail thru unfamiliar territory with strict instructions
NOT to exceed one statute mile (5,280 ft). I did not actually run his
trail as once the pack left I hopped into my backup car (the
Interceptor smelled like dead feet after being used for two beer
stops @1500) for a quick food run down to Dominick’s as the pack
would be expecting chow when they got back, and way some of these
harriers run, we’re talking ten minutes or less, hangover or not.
RUN!!!

Anyhoo, Indy’s C No Panty Ho graciously stayed back to help grab the
grub and when we got back we were joined by Assfault (who fired up
the Skydeck’s brand new (virgin) BBQ grille and cooked the bacon –
first time I’ve seen that done but if you think about it it does seem
to make sense) and Moan On who prepared a feast for the starving pack
down belowdeck for when they returned.

As we were unloading, back saunters in our hare saying “I think these
guys are going to kill me as I think the trail was well over TWO
miles”. Near as I can tell from marks I’ve seen in the hood since
then the trail did a big clockwise loop first South and then West
around Party Central as the hare returned from the North. Great –
hungover, starving, and now pissed hashers were about to stream back
to my house en masse… just can’t wait for that!

When they arrived, we cleverly stalled them with beer and bagels on
the Skydeck where keg #2 from 1500 the previous day finally gave up
the ghost. Fortunately I had passed on Chicked Stiffer’s instructions
and gotten a THIRD KEG just in case. Hindsight being 20/20 that
turned out to be a very good call. Calvin Klein showed us he still
had it with yet another excellent circle in which people were called
out for everything imaginable. Soon food was brought up to the
Skydeck and the circle was paused as the pack pounced on BREAKFAST.

Peeps hung out after that, some more Chicago locals filtered in (I
think for the food) and circle was reconvened for yet another round
of down downs and continued as folks slowly started to filter out for
their buses, trains, flights, etc. Next thing you know keg #3 was
floating but for some miraculous reason continued to spout forth
pitcher after pitcher of glorious beer like some kind of Hash
Hannukah miracle. Eventually the laws of Fluid Mechanics set in and
some quick thinking hashers went to the corner liquor store for a
couple more cases where we finished off the day with Chicken Stiffer
escorting the late bus people (I believe it was Indy – after three
days of balls out drinking I’m not 100% sure!) to Union Station. The
keg hoist performed its final duties of the weekend admirably
bringing back down the empty barrels prior to being stowed until my
next party.

Fortunately, due to a surge in late registrations for 1500 itself we
had enough money from the event to cover the cost of hangover so we
waived our announced $9 hash cash for trail & breakfast and made this
a FREE HASH which was an unexpected bonus for the visitors and lost
opportunity for those who slept in and skipped the Hangover trail…
literally, you snooze you looze (booze). But from those who made it
out for the events it seems like folks had a great time overall so we
will do something like this again (maybe use someone else’s car for
the beer stops next time tho as the cop car now reeks like Alpine
Valley after a Jimmy Buffett concert!). Thanks to all our visitors –
see all y’all next time and mad props to all the locals whose efforts
helped us pull this one off and not to mention the RA’s for the
unbelievable weather- sometimes it’s better to be lucky than good!!!

It’s Too Soft
Proprietor, Party Central Chicago
and someone who really needs to clean out the back of his car