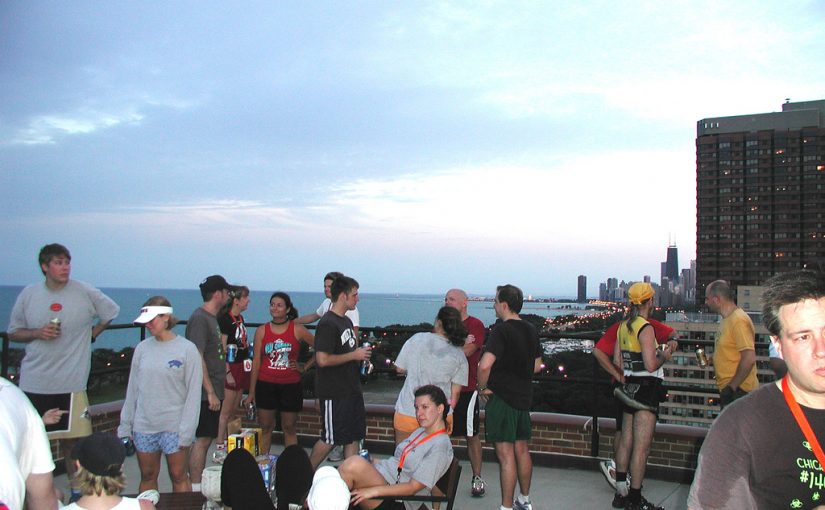 The hash left the friendly confines of Chicago and traveled north to Evanston where Post 42 sponsored the hash off the Central Purple line stop. The hash started at 1 pm on a beautiful Sunday afternoon. The Hares were still laying trail when we started due to a long drinking night on Saturday that EZ partook in. We had a nice crowd for being outside the city and even ROTTEN WHORE found the time to make it up for the hash. The Pack had a quick chalk talk and then we were off looking for marks East of the el-tracks. LIFA and JUST TRACIE were out in front with JUST ROB. The Trail meandered through the sleepy lakeside of Evanston. The first real problems occurred when the pack got to the lake front park and could not find the marks after a check. LIFA, MOUTHFUL OF MEAT, AT YOUR CERVIX, and others went ranging for marks but came up empty. CHICKEN STIFFER eventually found marks going north on Sheridan Road and he thought he was behind the pack until he got to B’hai Temple
and realized that he was the FRB. The trail from here wandered through the grounds of the gorgeous temple. The trail went west and south until CHICKEN came to a split that seemed to have no marks after it until you went across the street to look for them. By this time JUST MOLLY, JUST TRACIE, and JUST ROB had caught up to the front of the pack. We trail blazed for the rest of the pack and soon were near the familiar bridge that was used the previous year for a beer stop. This year though it was haunted by an ugly troll that scared the Crap out of our new virgin JUST TRACIE. The pack enjoyed the beer but not the smelly river that it crossed.
Eventually the whole pack made it to the beer stop and ROTTEN WHORE took a nice seat down by the river with her gold and cold beer. JUST STEVE, JUST JONATHAN, JUST ALAN, and MOUTHFUL of MEAT had to be directed into the hidden beer stop by our very own LIFA. ITS TOO SOFT seemed to be snapping pictures as he usually does for the hash. It was just a perfect day to run, much like it was the whole weekend. The beer stop ended and we walked pack the mile to the ON-IN where we had to send EZ and AT YOUR CERVIX out to get us some cheap beer. AT YOUR CERVIX was denied beer at Jewel because she looked too young??? When they returned the circle was started and our hares were punished for general lateness. Late starting the trail, late with the beer, just late!! OPEN WIDE, ERECT THE RED, and LIFA were our reboots for the day. We welcomed our new virgins JUST TRACIE and JUST ROB. W ALL BANGHER and ONE HANDED TYPIST were the DFL s??? The circle was soon ended in favor of the
pack watching the Bears, who won, and eating chilidogs. In the end the hares made up for the mistakes with great weather and good food!!!! See you next week at the COSTUME HASH!!!