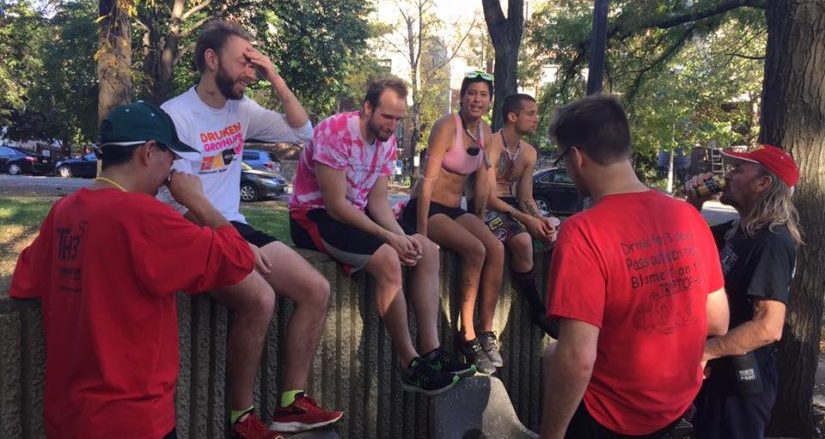 CALVIN and BATTRIES laid this hash from a new hash bar south of North Ave. on Wells street and thing went really well. We had a private room, warm beer, which was switched for cold beer, and good food. This combination usually makes the hash happy. Throw in the fact that we had a roaring fireplace and over 20 hashers on a cold wet day than you have a very happy pack. The trail was set with over 20 pounds of red powder AKA flour which CALVIN carried while Batteries wore her FMB boots to stay warm and lazy to carry the dry wall. The circle was started after numerous hashers bought the new haberdashery. This new stuff should be gone by Anthrax so if you want a new shirt show up early at Anthrax to be able to find your size and color. We have already sold about 33% of the new stuff bought. I guess we are going to need to find new things to make! Back to the circle. The pack of 20 listened and were told be careful of the ICE but JUST STEVE ran on and quickly fell on
his ass. LIFA and CHIPPENDALE soon had the FRB position and had the pack going south and west and then back east. JUST KATHERINE was not going to let a little Chicago winter prevent her from wearing shorts, and shorts she wore!! The pack soon was down near the Water Tower place. ITS TOO SOFT with his whistler GPS device was ever vigilant as to where he was, and close behind him was CUMS in MY ASSFAULT and MOUTHFUL OF MEAT. We ran by the TOWERING PHALIC symbol known as the JOHN has a COCK building but the doorman were seen sweeping up the flour marks left outside by CALVIN, it helped that the hares were sweeping this trail. LIFA soon was nailed and took the false trail out to the lake, but I saw JUST STEVE cross Michigan ave. on trail so I called for JUST TYRONE and SUPER STUFFER to follow him. The trail wound back and forth through the tall buildings until it got back to the bar.
AT YOUR CERVIX, JUST KATHERINE, SPECIAL ED GIVER, and MOUTHFUL were soon warming their buns on the fire, now all the needed was some hot dogs but they turned down HORN-E. The pack called for beer and I obliged by ordering four pitchers the only problem is was it tasted like it had sat near the fire for too long so our bartender went down stairs to get the cold stuff. CHIPPENDALE was hot for food so CALVIN got the circle going quickly in 15 minutes and we brought out our victims for Hash crimes. FROSTED DISCHARGE, JUST PAT, and JUST ROB were part of the six-pack group wearing their new hash gear proudly so they drank. If you don�t understand this look at the picture Czar�s shots in the album! The FRB was LIFA?!?!? and the whining bitch was ITS TOO SOFT for having to run the trail hung over. MOUNT ME drank for his new territory the nice area of streeterville, and soon spilled most of his beer on the floor? BATTERIES drank for her FMB�s and soon pointed out that
PETERBILT was wearing Velcro shoes again. CALIN had the circle going for 30 minutes because he needed to practice for the ANTHRAX HASH next weekend. CHIPPENDALE was so hungry it looked like he was doing the pee pee dance so we closed circle and he ran out for pizza. After everyone ate we reopened the circle and named JUST STEVE—> JUST EILEEN. We also named JUST KATHERINE—> TOTALLY BUTCH. She almost was named B�ROCK out with your COCK OUT but it lost be a small margin?? Premonition anyone? Hope to see you next weekend some time REMEMBER
DEC. 14= PUB CRAWL 6:30 pm at WRIGHTWOOD TAP
DEC. 15= ANTHRAX HASH 2 pm at HIDDEN SHAMROCK
DEC. 16= HANGOVER HASH 11 am hared by FLUFFER sin city hasher

ALL ARE WELCOME to these events