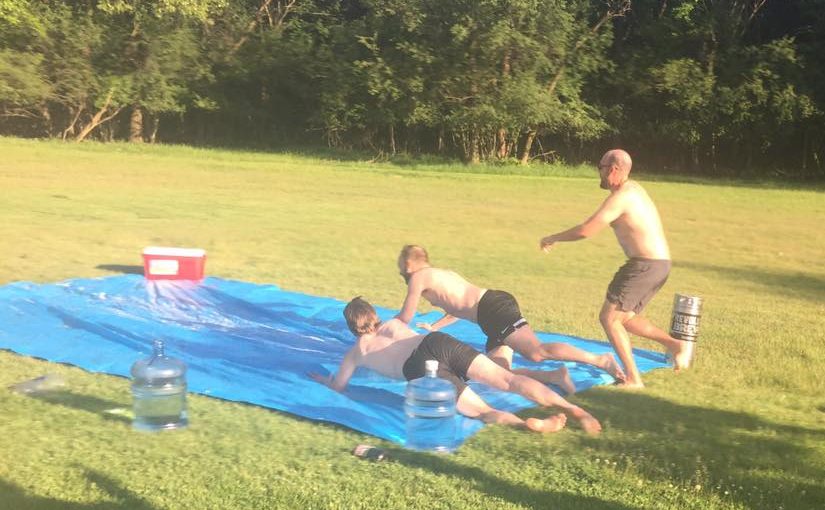 This is the second time the CHICAGO HASH has used this venue. The last time was POP in “2005”, and just like that day the skies opened up upon us and the wrath of MOTHER NATURE was taken out upon the trial and hashers. The last time at POP I can remember HAPPY ASS GRABBER as a neophyte hasher and SUGAR NIPPLES dancing in the lightening and rain on Marlins patio. If you do not believe me look at the pictures.

The Chicago hash had invaded SECOND CITY TERRITORY again and storm clouds were waiting for us!!! HUNKA and FUCKKO were blessed by CALVIN KLEIN our RA and they were off setting trail. GOLDEN EAGLE gave the chalk talk and explained to our virgins and regular Chicago hashers what the marks meant and we did a quick Father Abraham and were off. Well Some of us were off. THE PORCELAIN GOD, DICKIN CIDER, and I stayed behind the first two because of injuries the last because I was the smart one. MILK MY YAK and BARKS ON ALL FOURS went out and soon fifteen minutes later they were back. The Skies out west were black and rain was immient. We enjoyed steaks and burgers at the bar while those hashers tried to navigate the trail. The rains soon hit and it was “BIG FAT RAIN” as Forest Gump might say and still the hashers stayed out there. WE came to find out later that The two GM’s HORN-E and HAPPY were curled up together in a fetal position on someones porch trying to protect themselves from Mother Natures fury. CALVIN’s quote of the night was that the Sky was GREEN??? HAPPY said, “ You could actually feel the air pressure change rapidly and his ears even popped!!” The five of us back in the bar talked about sending out a search party but decided to keep eating our food. The First one back was ROTTEN WHORE, she said “ I have never run so fast back and it wasn’t for beer!!” Slowly the pack came back after tornado Sirens sounded in the suburb of Lyons!! MUDSUCKER wished he had eyeglass wipers so he could find his way home. HORN-E and even his horn was shaking in fear. All made it back safely and we watched the weather move in on Wrigley Field. The storm did pass and we did make it back out onto the patio for a circle. Remember hashers if you hear someone chosing MARLINS bar in the future for a hash be careful of what may happen. TWO HAHSES and TWO WRATH of GOD type thunderstorms is not a good sign!!!

NEXT hash MONDAY at STOCKS and BLONDES @ 40 N. Wells

Next Tuesday Movie Night @ 8:25 An Affair to Remember