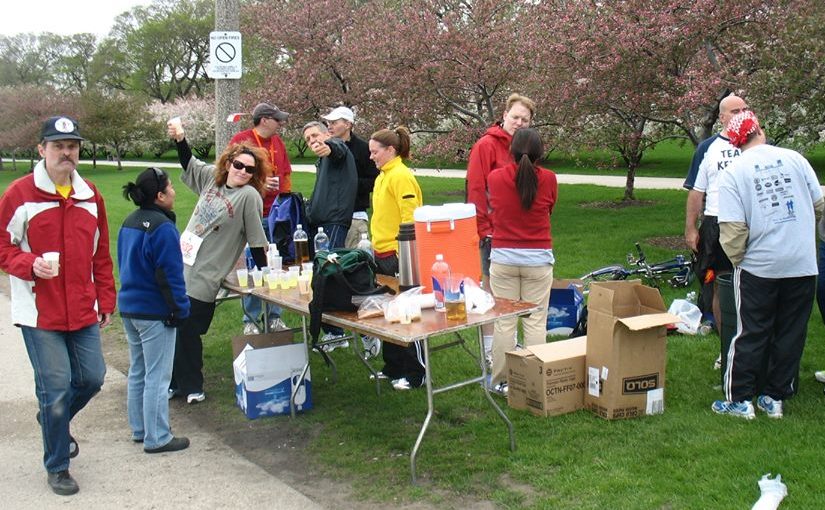 Last time I was at this bar was for a beer stop and we took over the bar for the 20 minutes we were there. Today was no different!!! The hares CROP DUSTER and JUST JULIA cleared the hash with the owner and we had $6 pitchers and they even reserved an area of the bar for us to use, Nice Job!!! WRAPPER SNATCHER and PORECELAIN GOD played the part of bag watchers in the bar because PORCELAIN currently has a lame foot and WRAPPER needed to play nurse to him. Tonight the hash saw another 30+ hashers show up and even a few from the bungle in the jungle weekend showed. JUST JULIA and CROP gave us a chalk talk and we were off!! The trail was awesome tonight a quote from JUST AMANDA. The hares lead us thru the scenic areas of downtown and then had a beer stop on the Chicago River. The first part of the trail ran north and UPLOADER, CHIP-N-DALE, and HORN-E seemed to be the leaders that I followed. The trail crossed the Chicago River and ran under Lower Whacker. Most of the pack seemed to be a little confused here because most did not cross the river but ran east along the river with HORN-E. JUST JOHN and I came up from lower Whacker and were on Michigan Avenue. The trail here ran behind a building and then back west. The hares set a check just east of Michigan and Randolph that most of the pack missed, truthfully the pack followed JUST JOHN and I thinking we were on and JUST NICK even called on when he saw a mark but he wasn’t because it was after a check. The pack really got messed up and people like BONER MALFUNCTION, JUST KATIE and others gave up because of the confusion and went back to the bar. It is unfortunate because the rest of the trail ran thru Millennium Park and over the winding bridge. JUST JOHN and I went back to the check and found true trail going SW and found the arrows pointing into the park. The hares did a great job sweeping, I know because on Tuesday before movie night in Grant Park I checked the trail and it was marked well. Just John and I soon heard HORN-E blowing in the park and he and I found trail going west on Adams and then thru the Finical district. Here it crossed the river again by Union Station and even ran thru the train station. JUST JOHN almost caught an AMTRAK to St. Louis this night or so he claims. The trail ran back over the river and the beer stop was in a park next to the river. It was fun seeing the back half of the pack cross the river twice before the made it to the beer stop. JUST SHAINA, JUST AMANDA, ITS TOO SOFT, MAGNETIC MUFF, MUDSUCKER, HORN-E, UPLOADER, 69-cent MAN should be commended for locating true trail tonight. We had BUD and BUD light at the stop and waited for the other half of the pack that never showed.
Back at the BAR JUST NICK, JUST ASHLEY, JUST CARLY and others were drinking and watching Mike Phelps win his gold medals. We got back and started the circle. Our FRB’s were HORN-E and I. Our DFL’s were those that never made it to the beer stop. JUST SHAINA and Beer mistress JUST AMANDA had a down down for talking about Mr. Phelps body in the circle. BONER and CHIP were our visitors for the day. JUST ASHLEY drank for finally drinking legally in our circle because last time she came and drank she was only 20 and with her mom, JUST LORI. Our virgins JUST CARLY and JUST RANKIN had a great time and we now they shall return. Our NRB’s were SNATCHSQUATCH, HOOSIER DADDY, JUST I LEAN, CUMS ON I LEAN, WRAPPER SNATCHER, and PORCELAIN GOD. ITS TOO SOFT was our rep from the Bungle in the Jungle party along with BONER. The circle was soon closed but we did reopen it to name some people. JUST JOHN is now “FREE VD”�, JUST JULIA is now “GINGER SNATCH”, and JUST AMANDA is now “POULTRY FUCKER” go figure.
The next day 10 hashers POULTRY F******, JUST I LEAN, JUST BILL, CUMS on I LEAN, SUPER STUF’HER, MOUTHFUL, CHICKEN STIFFER, ANAL ASSAULT, and W’ALL BANGHER, and JUST BELLA watcher “A TOUCH OF EVIL”� at movies in the park!!!

SEE YOU NEXT MONDAY OR SATURDAY at ITS TOO SOFT roof deck party at 9 pm 933 W. WOLFRAM!!!