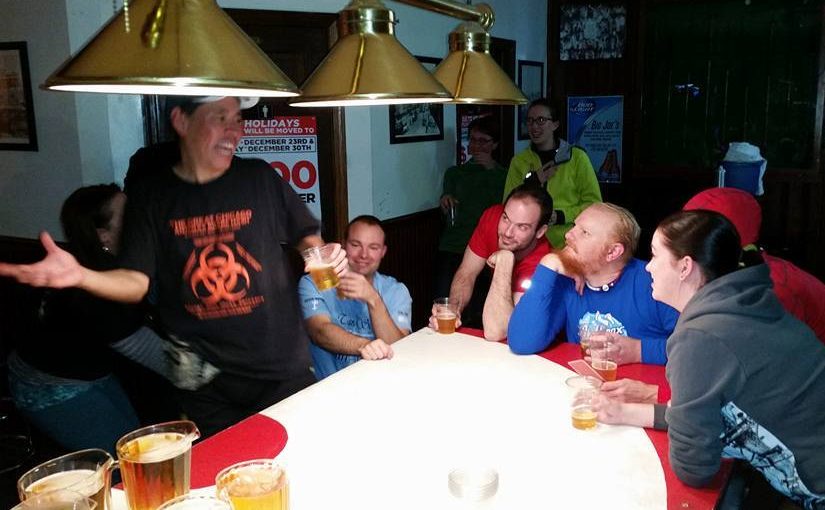 “Smells like Foot Locker”. ‘Nuff said, dems is NEW SHOES!!!
HASH TRASH
CHICAGO #1566
Monday Sept. 29, 2008 @ Flounders
HARES: Virtually Hung, Mount Schwiiinga
VIRGINS:
VISITORS: Hot Lips, Neon- Panama Hash, Soggy Deposit- Madison
HASHERS: Chicken Stiffer, Sperm Diversion, Porcelain God, Barks on all Fours, Just Hee-Jai, Just John, Sir Poops A lot, Horn-e, International Virgin, Glory Hole, Magnetic Muff, Crop Duster, R-Tard-E, Just I Lean, Milk My Yak, Uploader, One Handed Typist, Its Too Soft, Just Eileen, Cheese Eating Surrender Monkey,
TOTAL HASHERS =25
The day started off with heavy rains and cooler weather but as predicted the clouds and rains subsided and gave us a beautiful night for hashing which was preceeded by a White Sox winner and another game set for Tuesday!! The pack soon gathered at the appointed place and after watching the Sox win over the tigers we were ready to run. Our visitor NEON brought a horn that was longer and louder than even our own HORN-E. MOUNT SCHWIIINGA gave us our chalk talk and JUST I LEAN was confused about his name calling himself “CROP DUSTER” tonight?
The pack was off to the west with the real CROP DUSTER leading us over the Chicago River. The first split was found at Webster and Ashland I went north and was rewarded with an arrow once I crossed the river again so I was on!! SPERM DIVERSION and the PORCELAIN GOD were hot on my CHICKEN TAIL but we got slowed down with our first check at the next corner. I chose correctly again and was soon by myself running on Southport. I could hear the Horn of NEON behind us cutting through the night air keeping the pack together.
The trail snaked back and forth through the Lincoln Park green zone using alleys and even circle jerked around a park on Racine and Webster. Eventually the trail wound up at a check on Armitage with true trail going south and then back NW until it got to the corner of Armitage and Clybourn. The trail went west and ended at a beer stop on railroad tracks near the steel plant on the river. MILK MY YAK, BARKS ON ALL FOURS, SCHWIIINGA, and VIRTUALLY HUNG greeted us there with Bud and Lite beer. We drank our bellies full and were off through a crack in a fence JUST HEE-JAI was able to navigate the gate along with many of the other hashers.
We got back to the bar and Just Lisa our bartender was quick on the draw when it came to pitchers. INTERNATIOANL VIRGIN was on the run but seemed to take off early but we did miss her. JUST JOHN and JUST HEE-JAI were called in for being two timers. Our visitors HOT LIPS, NEON, and SOGGY DEPOSIST gave us a nice look at their bums when it came time for joke, a song or a body part!!! ITS TOO SOFT, MILK, BARKS, and JUST EILEEN were our non-runners tonight. CHICKEN was the FRB.
UPLOADER and SOGGY DEPOSIST drank together because when one Madison hasher drinks all Madison hashers drink. ONE HANDED TYPIST and PORCELAIN GOD were our Reboots. CROP DUSTER drank for semi-new shoes? All had fun but the funniest thing came last when little hashers were left. The hash on October 26th will see a name off between CROP DUSTER and JUST I LEAN. The winner of this contest will retain the name CROP DUSTER and the Loser will be named JUST I LEAN. The contest will be judged on best costume and whatever extra’s they come up with for our entertainment! !! Good luck Gentlemen and may the best hasher win!!
CHICKEN STIFFER
CH3-GM
_______