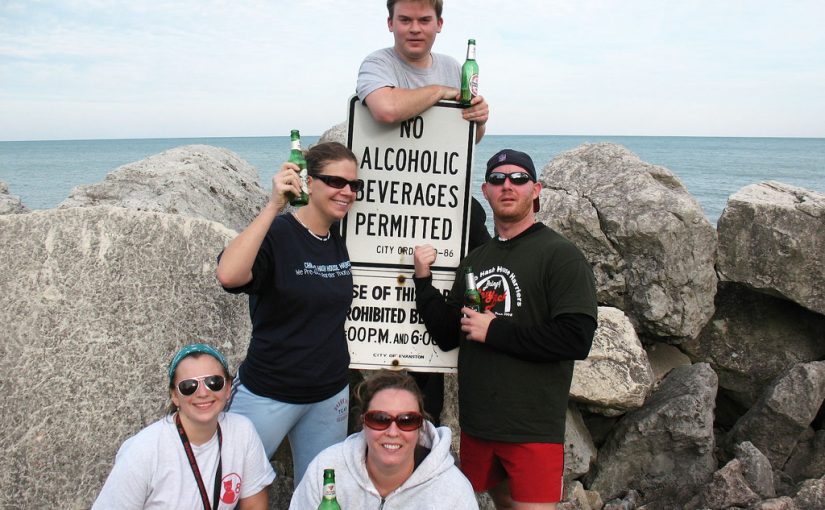 31-one hashers were out today to see UPLOADER. Today’s hash was suggested by ERIN GO BUFF a few weeks ago so we did a pick up hash where the hares name was drawn from a hat after the chalk talk. Our first hare for the day was CUMA SLUTRA she took off west and we only gave her a five-minute head start and then the pack took off after her. Leading the pack out was ERIN GO BUFF and LIFA along with a virgin named JUST TIM. We went by the old Polish church in buck town and west to Damen where we crossed over Armitage. Here the hare was caught by ERIN GO BUFF and CHICKEN STIFFER and ERIN became the hare. We gave him only 5 more minutes and then the pack was back on trail but JUST TIM caught the here in less then 5-minutes and we had a virgin hare. The Pack had taken a detour due to a false trail and then the pack with JUST SHANIA, MALE HARRY and others caught up to the others of the waiting pack. JUST TIM laid a nice trail until he was caught by LIFA on the train tracks, and you guessed it he became the hare. Here the rain and a little cross trail markings began to hinder our little adventure but we had been out for about one hour of running already, so we began to run back towards the bar and get out of the inclement weather.
Back at the bar we saw JUST GENESIS, HORN-E, HARRY PUSSY and others because they decided to short cut trail and just run back to the bar because they lost trail? HORN-E was not being his usual annoying self but was extra annoying because he couldn’t get a beer when he wanted. Seems the hash cash was in the GM’s car along with 7-8 hashers bags and he had to get the hash bags first so HORN-E had to wait an extra five-minutes for his beer. The bar gave us the use of a private room in back for circle, which was great since the DJ was playing some loud music up front. CALVIN who joined us ran the circle and we gave mad props to UPLOADER who returned to us after his accident. LIFA gave him a Hash shirt and a TH3 cowbell, which was cool. What was really cool was seeing UPLOADER up and walking around with an assist from a cane, which was wonderful to see.
We said Hi to our visitors from Las Vegas and Munich. PICTURE ME NAKED from LV and BUTT UGLY and COMMANDO from MUNICH brought us good tidings from their respective hashes. JUST TIM and JUST JAMES were our virgins for today and JUST TIM even tried his hand at haring for a few minutes before he was caught glad to see you at the hash gentlemen and come back next week free of chargee!!! JUST SHANIA and JUST GENESIS got their 10-run whistles and lanyards today congrats on completing your ten runs. We even saw INTERNATIONAL VIRGIN hobble into the hash today dressed up in red for Valentine’s Day? We drank the bar out of bud lite and had to drink Goose Island beer for the rest of the night but at $7 a pitcher no one was complaining, well maybe Horn-e was about something? Next week is the Easter Hash at Virtual Hungs place so eat your Easter dinner early and make it to the hash at 2 pm.