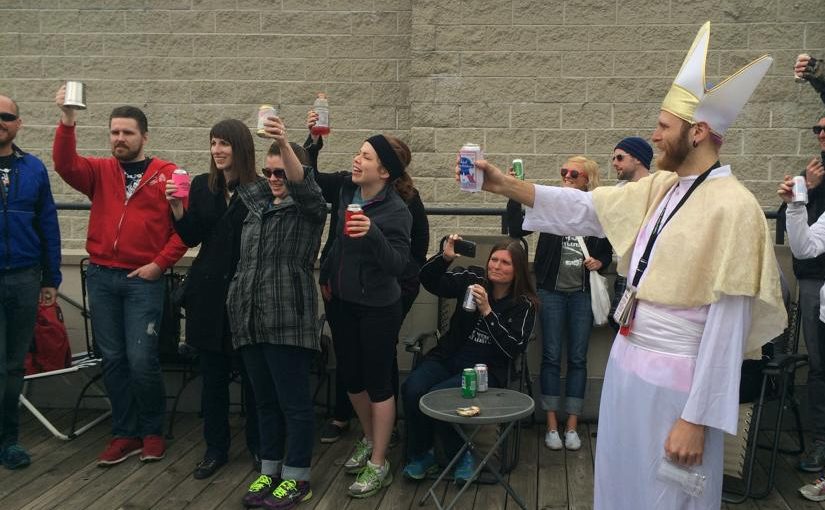 This week’s hash was a prime example of why you go to the expense of actually telling somebody that they’re going to be co-haring with you – this really isn’t that unusual of an occurrence, as most haring collaborations are devised while drunk, but the issue should be addressed anyway. Thanks to some sort of communication mix-up, Super Stuff’her signed up to hare with Ass Capades as his co-hare and never bothered to tell Ass Capades, and when Super Stuff’her found out that he couldn’t hare thanks to his actually having a job (overachiever) Ass Capades was left with less than a week to find a spot to hare out of. What is the hash to do? Back to Stocks & Blondes, of course!

Not only was trail off to a shitty start thanks to the lack of planning, Ass Capades did the two surefire things to ensure that everyone would complain about his trail: he recruited R Tard E to co-hare and he hared on a day that it rained. Brilliant. Despite Stocks & Blondes good and sheltered location right next to the Brown Line, the chalk marks designating trail were good and washed out by the time that hashers started arriving – sure enough, that was far from the only mark on trail that had been washed out. The early afternoon rain didn’t bother to scare off very many hashers, though, as the crowd at the start was a good size and even managed to include a number of virgins (including former student of Fistful of Pricks, Just Eric – OH THE DRAMA/SEXUAL TENSION!)

An impeccably crappy chalk talk was run by Ass Capades, where he conveniently forgot to tell the virgins that a check can go in any direction before trail started and the pack quickly went down an alleyway just to the south of the bar – an unclaimed construction vehicle sat in the alleyway, but sadly Hoosier Daddy was afraid to steal it and ride it along trail, very disappointing. The pack wove in and out of some alleyways, working their way south before crossing out of the Loop and across the South Branch at Adams – apparently Thirstday running every single hash in May on the Near West side wasn’t enough for these two hares, though they were lucky enough to avoid any old marks by quickly heading South. Despite the relatively large pack size, almost everyone on trail seemed to be suffering from a serious check allergy – whenever a check was encountered, only a group of about four or five hashers bothered to head out and look for marks. As much as I enjoy standing around at checks as much as the next guy, when DFLs like Snatchsquatch and Fistful of Pricks catch back up to the pack at each and every check because everyone not named Erin Go Buff, Lifa, Chicken Stiff’her, Happy Ass Grabber, or Horn E are standing with their thumbs up their butts you have a serious problem (or a seriously shitty trail, which isn’t out of the question considering the hares). The pack also suffered from hashing far too much in the “Green Zone,” as it should have been apparent to anyone who knows Chicago that the only place for trail to cross back over the South Fork once trail went south of Harrison was Roosevelt (18th was also an option, but would have resulted in the crucifixion of the hares) – sure enough, Roosevelt was where trail crossed back into the South Loop before the hares stopped even trying to trick the pack and ran trail straight north up Clark to a beer stop tucked next to Congress Parkway. Thinking themselves oh so cute, the two hares were spotted giggling like little school girls by the FRB (and visitor) Animal upon his arrival to the beer stop – R Tard E had better watch himself, as Ass Capades has already been claimed by Snatchsquatch and R Tard E’s pimp Just I Lean is due back from Spain at any moment.

After a quick beer stop (thanks to the hares picking the only spot in the entire city currently infested by mosquitoes), the pack made their way back up to Stock & Blondes for circle and some good bar food (which RA Calvin Klein even let us eat in circle this time – he must have been feeling generous thanks to his actually bothering to run trail). Ass Capades and R Tard E were called in numerous times for their crappy trail (though significantly less crappy by R Tard E standards, so the R Tardese classes must have worked for Ass Capades), and the hash was graced with the presence of two visitors in the form of Animal and Beam Me Up Twatty – they were both in town for something, but whatever story they had to tell was much too long and the circle was quickly disrupted by Snatchsquatch and Ass Capades spooning (how is it that a monster like Snatchsquatch is the little spoon, anyway?) Animal did come bearing a gift for our illustrious GM Erin Go Buff in the form of a shirt from his home hash and Animal joined in with Lifa for a thrilling rendition of a song about Seoul prostitutes. Unfortunately our GM Erin Go Buff wasn’t thinking too far ahead, as he forgot to call ahead and see about purchasing a keg from Stocks & Blondes, so hash cash ran out far too early and the hat was passed for more beer.