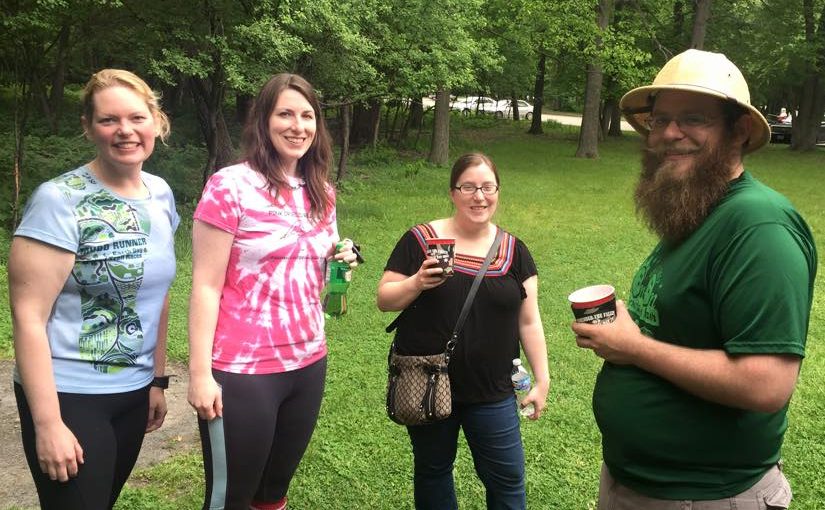 This hash used a bar that long ago, I believe, a hasher named DUDE WHERE’S MY CAR put a check at the front door at the Fullerton entrance and the trail went thru the bar. Today SNATCHSQUATCH and LIFA just had it as the on-in but it did bring back found memories of CHICKEN’s first couple of hashes in 2004. The two hares started with their chalk talk and hashers came out of the wood work. ITS TOO SOFT was dropped off by his mom, JUST RITA. ASSCAPADE showed up with DARK SIDE of the PUN?? Do these people own clocks, cell phones, sun dials??? We run at 2:30 pm every week you slackers.
The chalk talk was done and off we went west on Fullerton quickly taking a turn North with ICE PRINCESS and HALF-FAG in the lead. Soon we all got stopped at check just south Logan Boulevard. I think the pack found a short cut North and Horn-e was off and running back and forth along the Logan Boulevard. DARK SIDE OF THE PUN and I just decided to run directly across the street and we found trail cutting of about 4 blocks of running back and forth. We recrossed Logan and ran thru an alley and Boom a split. This split though pointed two directions and one choice ran out onto Milwaukee Ave. and into a mark but this mark was off a check so it screwed up and split the pack. I think the new pack leader was ICE PRINCESS and HALF FAG. I eventually got back to the check the hares wanted us to find and found CORNSTAR and POULTRY find marks in Logan Square that were left over from the New Years Hash? so not only was the pack confused about the bad split but stray marks from a previous hash. We soon caught up the LIFA the hare sweeping from the front of the pack and dragged TRANNY COCK KICKER along with us on the true trail. The FRB’s were no where to bee seen or more importantly heard. We wound our ways behind churches and things finally ending up running straight east thru Palmer Square till it dead ended at a church.
The pack I guess caught the FRB’s and found trail running south to Armitage turning east again where the was the beer stop. Here we picked up FISTFUL OF PRICKS and SOUL TACO on trail. They were hoarding all the cans of Pabst they could find, and HORN-E was busy trying to recruit the two to lay trail for his moon hash on Monday because it was MLK day? That’s just wrong in so many ways!! Our two virgins JUST GEORGE and JUST TAMMY were happy to be part of the hash today and we had perfect running conditions today? We finished our beers and wandered the Taco Palace heaven back to the bar. (there must have been at least 5-6 Taquieras with in two blocks of the bar. In fact FISTY went out and brought in Mexican food after the circle making us all hungry. Back at the bar we ran into HOOSIER DADDY and JUST AMBER. I was slightly amazed that at such a dive bar pitchers were still $7 a pop but were a rich hash now. See MM notes to get that joke. HALF-FAG ran circle and seems to be filling that role well after taking over from CALVIN KLEIN. Numerous punishments were handed out and the beer flowed with out stopping. The bar even surprised me by lowering the muzac sound and giving us two free pitchers, of beer that is!!!! Well next week we will celebrate the B-day of CALVIN KLEIN and $ 3.75 pitchers of Coor Lite and Joe’s Bar. See you all next week