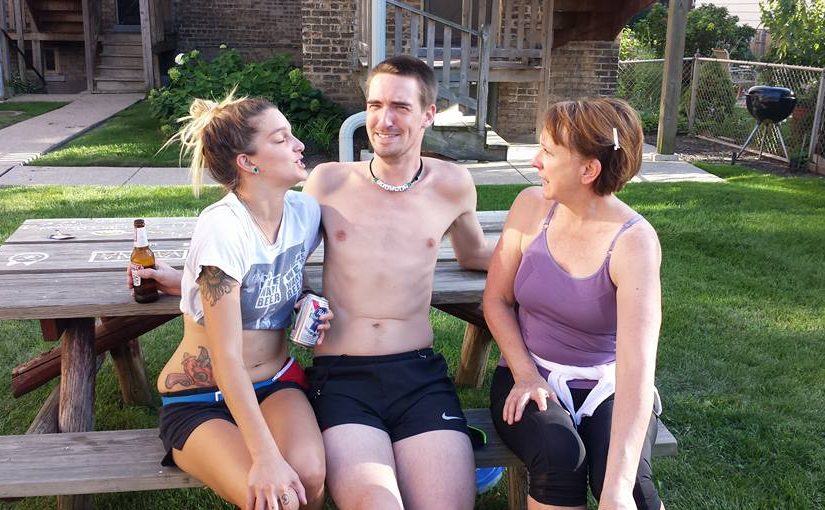 This was a cold day at the start. It had been raining. I arrived and almost no one was there. But finally a small pack of 15 hounds gathered and were sent off. Its Too Soft was a sort of sweep hare who didn’t really sweep, but was at the beer stop. Lifa was still laying trail after the rain. We headed west in the alley and across Sheffield and then north to a Split. We lost some of the pack there and we followed Goldilocks to the west and then south. You live by ranging, you die by ranging and it took some of those that headed north quite a while to catch up again. Meanwhile we headed south to a mix-up on Lincoln and then south following Goldilocks to Wrightwood and a good check. I wandered around through the park and only two arrows before spotting Salty Gash coming out of an alley yelling, ‘I’m On, I’m On, I’m On.’ So I blew the horn and finally got the attention of the pack and we were off through the alley south and then west. Muffin The Mule had joined us and we tried to keep up with him as we headed west to Racine. Here the hare laid a nice loop to the north and Horn-E found marks going south and rallied the following pack with his horn. But another Split and Horn-E followed the pack back east in an alley and finally to a Check by De Paul. Trail headed a bit west and then south and back east to another Check at Webster and Sheffield. Goldilocks was to the south and seriously confused by Chicago marks. The pack was standing around doing nothing as usual. Muffin The Mule was to the east and crossed the street heading north. So Horn-E followed. There was a turn mark heading north and at the alley was a Split. Muffin The Mule was already turning around and heading back from the north. Horn-E headed east and finally spotted the elusive third arrow. Chicken Stifer was behind and bitching that Horn-E hadn’t blown his horn. I don’t blow the horn until I see the third arrow or hear an On call. I hadn’t. And why wasn’t he blowing his whistle? But the three of us ran on several blocks and then south to Webster again. The horn and whistle were blown for the pack, but they weren’t in sight. Trail went north on Halsted and through a gangway. At the next street, trail headed east across Halsted and to a Check at Lincoln. Muffin The Mule went north, Chicken Stifer wandered around the six corners a bit and Horn-E headed south. Found some marks, but not enough and at Oz Park he headed east. No marks at Lincoln, he headed north on a side street and finally Just Brendan came his way. So we retreated together to the north, to a block north of the Check and a block east. As we headed west we saw Ass Capades heading into an alley and coming our way. In the alley we found marks and this led to a Split, north and south. We had a bit of trouble finding a mark here as the next mark was across Fullerton and hidden. Odor Eater finally found it and we now had a pack assembled again. We ran north to an alley for a Split and Odor Eater headed east. So Horn-E headed north 100 feet to the next corner. No one was yelling ON, but the pack finally started down the alley. So Horn-E paralleled the pack to Clark. Oooops. Here Horn-E spotted a Split on the other side of the street. It looked like it could be off of a Check at the corner of Fullerton a block south. So Horn-E headed north until he spotted the third mark and blew his horn. But there was no one at the corner, now two blocks south. Oh oh. Did he miss a beer check in the park? No. He should have just continued on because the Beer Check was just a few more blocks at the Gazebo in the park. Now, if the On in trail is to close to the On Out trail, shit happens. But thinking he missed the Beer Check, he headed back on trail almost a half mile before spotting the BN. Damn. And in the distance he saw Muffin The Mule coming. So he returned on trail and soon approached the beer stop just as Muffin The Mule passed him.
A short time later Chicken Stifer arrived and bitched about Horn-E ranging and short cutting. Hey, no more then he has done countless times. Actually only a half block off course. but just at the right moment. Apparently the trail ranged south to the main entrance of the zoo and then back to a Check at Stockton and Fullerton. But all was good and we were drinking beer.
Back at the start, the keg was eventually tapped and a circle was held on the roof by Genesis who didn’t run. Speaking of those that didn’t run, we had a long list including Just Rita who watched the house while we hashed, and her brother, and Tinkle Trotsky, Ice Princess, Fistful Of Pricks, Glory Hole, R-Tard-E, Calvin Klein, Batteries Not Included, and who knows who else. They kept trickling on in. But they didn’t hash. Those that did, besides those mentioned in the story included Way To Much Jism (a visitor from Waukesha), Slippery Box (our FBI) Poultry Fucker, Corn Star, Magnetic Muff, Just Miguel and Mount Schwiiinga.