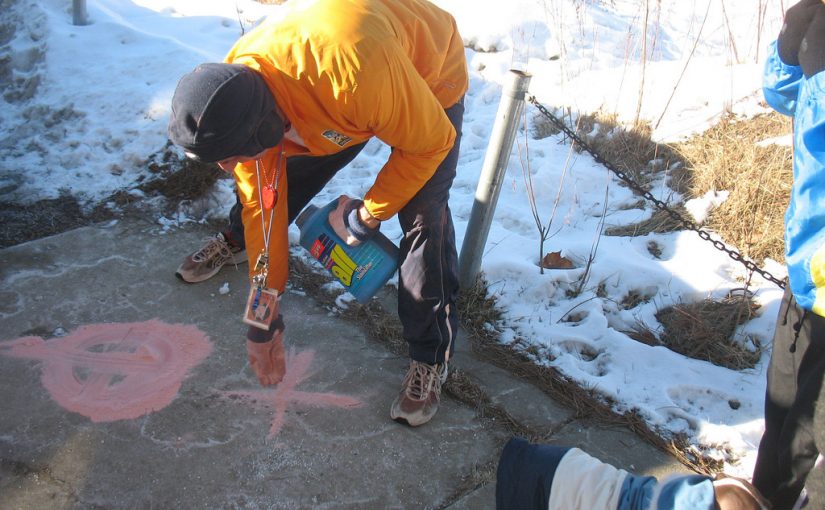 About fifteen to twenty years ago, we had a good hasher named Deep Tunnel who would drive in from St. Charles with a buddy, The Colonel, about twice a month for CH3 Sunday hashes. We would often get 25 to 30 hashers back then. Occasionally he wanted to hash in his town. For the St. Charles hashes we would get fifteen or so for the 35 to 40 mile hour drive straight west on North Ave. Good hashes in virgin trail. Well, this week CH3 hit a new low in attendance. Oh, we’ve had lower, weather and such, but this was a beautiful night and we ran only about 10 miles south of many of us with good parking available, close access to the outer drive and public transit. We had two hares Stab ’em & Slab ’em who often opens her home for the hash and Chippendale who came from up north to lay trail here. We had only three regular hashers, Horn-E, Corn Star, and Lifa, who took half a day vacation to show up. We also had one hasher we haven’t seen in a looooong time show up all the way from Joliet, Cum In My Nurse. And another hasher, Just Ricardo. He’s new to Chicago and first and last hashed in Southeast Africa. They have about 25 to 30 running in the jungles and we can only get five regulars to show up. And where was mis-management? If they want to run the hash, they should run the hash. Remember, sometimes the hash is a bit out of the way as hashers that live further out, have a hash near their home. Well, they come all the way to your hashes as often as they can. We that live closer to ground zero, need to support their hashes too. Hell, the last First Crack of the Moon Hash had as many. But attendance has been down week after week. And I don’t want to see some phony inflated numbers. The only numbers that really count are those on trail. The first Monday Hash of the year used to get over fifty about 20 years ago. This year we had 26. Last week we had 14. And that includes hares and virgins and visitors. Where are the so called regulars? The Chicago Hashers.

As for this last CH3 Hash, it worked well despite the small turnout. We know that in Moon hashing. We headed out the alley to the north and Corn Star led us. Check. She headed east and into this campus area and was again On and led us to another Check. She headed west and found another Check. Yes, Corn Star was out leading us and doing a great job. Finally we got hung up on a Check on 63rd. But that wasn’t to bad. Chippendale, our sweep hare couldn’t find his own trail either. Finally he led us to the east and north and we were on. The trail has Checks at about every 2 to 3 blocks and that kept us together and we all took turns finding trail, including out new hasher, Just Ricardo. But hell, he is another one of these fast runners and passed me often. We eventually worked our way under the south shore tracks and over to Jackson Park for a Beer Stop. Stab ’em and Slab ’em was waiting with a cooler and we enjoyed the nice weather. From here we headed south and eventually Cum In My Nurse led us out of the park at 67th St. It was Corn Star who again found this Check to the west. At the next Check, Horn-E finally led us to the south and through an alley with Just Ricardo and to a nice Back Check catching Horn-E and Just Ricardo. Back on 67th St, we headed west along the cemetery until a triple Split. Horn-E got lucky and headed west and then north to a little playground. Lifa and Just Ricardo came to the same playground from another direction and with two arrows pointing into the playground, we were sure there was another beer stop. Not. Bastard hares. A few blocks later we finished at Stab ’em and Slab ’em’s.
We held circle in the garage and had enough beer for a decent sized pack. Back to that problem of such a low turnout. Lifa picked an RA and it was Corn Star. This was the second week in a row without a regular RA. Last week it was R-Tard-E filling in and he did a fair first attempt. What would Corn Star do? Actually a fair first attempt. Well done. And so we all drank. Especially those damn hares.
We finally went back inside for multiple snacks and some pizzas. Hash cash went to the hostess for providing for us so well. Taxes? Fuck taxes. If you can’t even show up to collect the taxes, we don’t mail it in. It is our money and we drank it and ate it. We had a good time and had to leave by 11PM. Thanks hares.