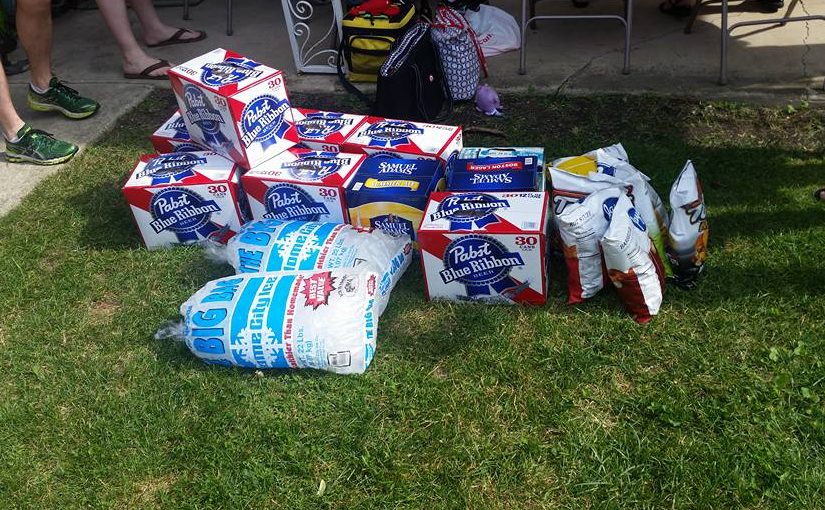 All right, this one was different. Two separate hashes with the second part of the first the same as the first part of the second and then a joint finish. Are you confused. We were too. And to top off the confusion, it was an A to B which always causes logistics problems at the finish when people are getting ready to leave.
This was set by Soar Balls and The International Virgin out of Jefferson Tap on Milwaukee for the Eagles and Sidetracks or something like that on Montrose for the Turkeys. Soar Balls got the Eagles off first and then left them on their own. Five eagles, Lower Wackoff, Ginger Snatch, Lifa, Tampon Tampoff, and a virgin, Just Kevin. What happened? I don’t know. But they struggled on a few marks and they had no sweep. This made it especially hardon, or is it hard on, on the one late cumer, Crop Duster.
Meanwhile, The International Virgin was gathering the turkeys and getting them off. How, I’m not sure. But soon we gathered out front. This group also included a large group of Chicago Hashers, Just Do Me Slowly, Corn Star and Horn-E. But we did have two other experienced hashers with us, Bubbles and Rumpswinga from Waukesha. And three hot virgins, Just Laura, Just Kelly and Just Rachael. That’s eight hounds. We’ve had bigger Bushman hashes and Moon Hashes this year. We headed south where Corn Star was a real star as she found the first Split leading us under the Expressway. But there she picked wrong and Rumpswinga got us off to the west and then south to a Check at Irving Park. When we got there, Rumpswinga had already checked out the east. I guess we weren’t heading straight to the Independence Tap. I had that one figured out already. And it really did end there. Soar Balls was working and what better way to fill your tip jar then to bring the hash in on the night you are working. Not a bad idea though. The pop corn flowed all night. And we had good service. But I digress. Back on trail at the Check. Horn-E crossed Irving Park to find a Split. He was sure it went east, but with hounds already to the east, he went west. Damn, it did go east. But hashing is a cooperative event and so you sometimes have to check out what probably isn’t so others in a more advantaged position can check out the obvious. Meanwhile, Rumpswinga was off with Just Kelly and Just Laura to the north west. Bye. Meanwhile we finally headed north with a slight loop through a housing area and all of the way to Milwaukee and a beer stop. Our first and the eagle’s second. And there we waited until just as we were about to leave, the eagles arrived with Tampon Tampoff winning.
From here we finally headed out on the last stretch on in. Already guessing the Independence Tap, we leaned in that direction at the Splits and Checks. We went east in an alley and then north on a street (?). Here was a Check and the pack was scattered. I drifted east and sure enough someone called On. but where. Again lost, I drifted north in an alley and at the end I saw Lifa. He found another Check. He went west looking to call other hounds and Horn-E went east and eventually was ON. This led north and Tampon Tampoff passed Horn-E to another check at Irving Park. The Independence Tap is getting close, so Horn-E headed east under the expressway. False. So he crossed Irving Park and checked under the underpass and there was an arrow. ON. He waved and called to the distant pack and saw a flashlight wave, so he took off. Two blocks later was the Independence Tap. Yes, the lame old fart came in first. Pissed Tampon Tampoff off when he got there to find Horn-E waiting with glass in hand.
Eventually we all got in along with the non runners, Way To Much Jism, Just Cindy, and another virgin, Just Abby and Its Too Soft and EZ On The Ass. Lifa and EZ On The Ass led various parts of a typically shitty circle. We called out the hares, virgins and visitors and the usual numerous shiity down downs. Then we settled into some pop corn and beer. And then the inevitable problem of taking public transit back to the start just to pick up cars and then go home. And this was the one time a year when I had a car and I still had to take public transit.