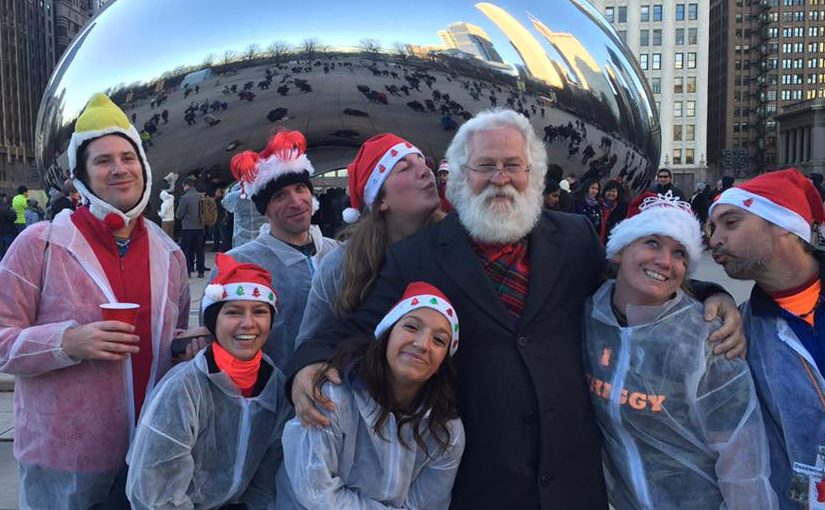 We had the usual crew of Ballsalotapus, Cum In My Ass Fault, Just Do Me Slowly and the main trail hare, Virtually Hung back to Paulie’s for another Chinese New Years Day Hash. I got out of bed at 1:31. Late. Shit happens. Somehow I managed to get there in time for a late start and just in time to give my name before the fireworks start of the hash. Nice pack, not to large because of the snow, but 18 hounds. And we headed south for two blocks before a Triple Split. Last to the start, Horn-E managed to find this mark and lead, the wrong way. The marks were partially buried in the fresh snow and the first mark looked like a turn. It went straight. Damn. First for two feet and never again. We started to head towards Chinatown following last years On In trail. But this only lasted through a field and an narrow passage and suddenly past last years beer stop and then north. Trail went into an alley and they were lost. Suddenly Horn-E saw someone emerge a block north and apparently On. He wasn’t, but the trail did go north. We then went back west. Huh. Chinatown is east. We found a Check in two blocks. Lifa found marks to the west and then north through a tunnel. But there were no marks at the other end. So we returned. Horn-E again tried to find marks to the east, but that damn devious hare was having none of it. Trail was found to the north under the highway and back towards the bar. Huh. But only for a short block and then over to Halsted. Now we headed through a tunnel under the tracks. We followed and Horn-E was now last behind Mudsucker and again was assuming that he had to go east. Damn, A block north and the trail went west through some new housing areas. Horn-E finally managed to pass the rear, mostly walking Stab ’em & Slab ’em, Special Head, and Bloody Thighs. We went further east and then into a tunnel to the south and a split. Had us all confused and people running back when Lifa found a very hidden mark. We came out at the south end and headed east and up to a rail right a way. Here was another Split and many were out in the main rail area looking all over. But it was Ginger Snatch who found marks to the south through deep snow. The KGB was soon passing Horn-E and right behind her. From here the trail headed west and eventually south and a Check that regrouped the pack. I think it was Bang Me Blow Me Get Me Off who found this trail because I short cut and paralleled and she came back to where I was, in front. We now headed south together and ran along a little park. Eventually some ran into the park and Tampon Tampoff found marks to the south. Well, both trails came into each other. The original trail actually led to that trail in the park and we were soon on that trail and heading east. A few blocks later we hit another rail right a way and I followed Ginger Snatch to the north. Last in this pack, but there were still about ten behind us and out of sight.
Two blocks later we were at a beer stop. The Asian bimbos, Just Do Me Slowly and Cum In My Ass Fault were serving beer like beautiful Wanchi girls. Ballsalotapus was playing Mandarin, Calvin Klein and Batteries Not Included, who didn’t run were there drinking our beer. And about ten hounds. We all watched some city front loader wasting taxpayer money shoveling snow into trucks when there were these two huge empty fields to plow snow into. Our city at work. Eventually the rest of the pack arrived.
Horn-E finally left the beer stop and led back to the bar where the house puppies were waiting, Just Melinda, Blue Balls sitting at the bar. Its Too Soft playing with his TV. No, not transvestite. Crop Duster the victim of a power mower was lame. Soon everyone came in.
Best story of the trail was Just Ryan who managed to find a plastic milk carton on trail and picked it up. Trouble was, a milk carton to some is a commode to others. Suddenly his gloves smelled like, well, SHIT. He would be named much later that day. Hobo Shit? No. He shall now be know as O’Shitty Runch. Somehow Horn-E was called out as DFL despite coming in ahead of about ten hashers and did a down down. It is a conspiracy. The hares did many as usual and well deserved. Our virgin was called out, Just Jake. He’ll be back. Many more drank, for running and not running and other stupid things, to numerous to mention.
Finally circle was called and food was served. Good flied lice. Then a raffle was held. I didn’t win anything. I finally got a ride home and took it. My feet were wet and cold and I needed a warm shower. Good time.
Who else was there? Nut Roper doing a Rahm Emanuel impersonation by almost losing his finger. But at least he got his caught in a pussy. Just Chris, Just Jeff, Bubbles The Sad Beer Clown, Whoreo, and 69 Cent Man,