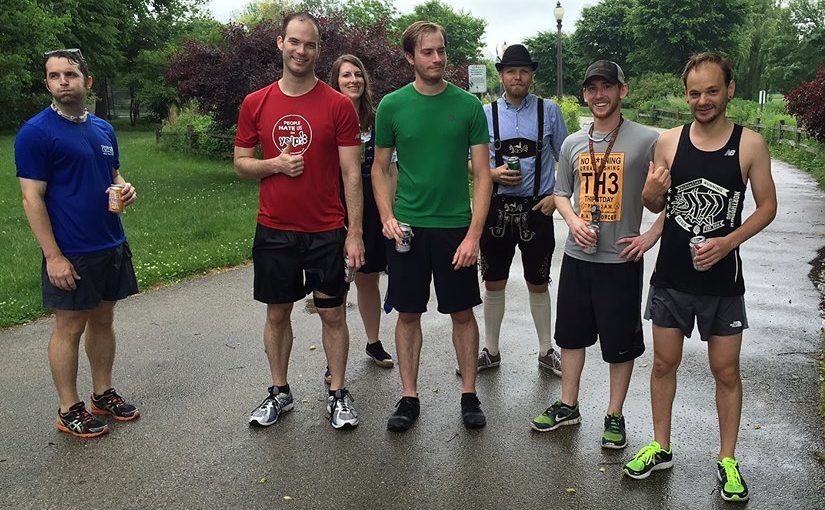 Mile 22 Marathon Beer Stop
Venue: Mudsucker’s Place (3520 S Wallace)
Mile 22 of the Marathon Time: 9:00 and on The annual Mile 22 beer stop for the marathon will be held again. Last year we had about 10 hashers giving out beer, and we went through cases of the golden “carbo load” brew. About 200 stopped for a taste. This year looks even better. Eight hashers from Tulsa and some from south Florida plan on stopping for a brew, then join us for the hash later. The plan: Anyone who wants to meet at my place (3520 S Wallace) prior to the stop (yeah, I could use some help hauling the beer over) is welcome anytime after 9:00 am. We will head over around 9:45. Or you can go directly to the beer stop. The beer stop will be on the east side of the Dan Ryan, south of 35th Street, i.e. one block east of Sox Park. Take the Red Line to 35th (Sox Park), go west to get to my place (Wallace is a stop light). Beer stop – exit the station, go east (left) 50 yards, south to the beer stop, usually about 100-200 yards. We will have a big sign there and will be on the sidewalk by the railroad tracks. We usually keep the stop open until 11:45 or so. The Dan Ryan exits are closed at 31st through 39th. You can exit at the next stop to the south and double back to my place (go west to Wallace then north). Parking near the beer stop is tough, suggest that you try my area. If the area near my house is full, go a few blocks south or west to find street parking. My home will be open after the Beer Stop to anyone while I head out to set the trail for the hash.