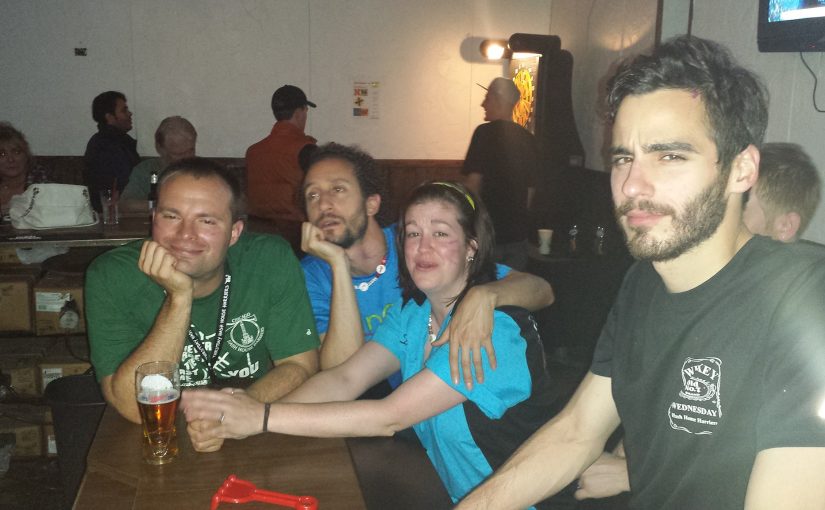 Bloody Lips was out on her first solo job of haring. It showed. Actually after a bad start, it wasn’t bad. At least what I saw of it. The venue was the Lake Shore Grill, that secret little bar/restaurant in the city’s underbelly. From here we saw a runner jogging by and coaxed Just Rob to join us. While waiting to get going, Fist and Clits made the mistake of bending over in front of me to stretch. Never bend over in front of me while I am holding my horn. She jumped so high she almost grabbed Jupiter as it sailed by. I think she still tingles.

Our first check had us running in circles for about 72 hours. I actually went off in the correct direction with Lower Wackoff towards the lake. Unfortunately we didn’t go far enough looking for the first mark and everybody then ran in circles for a long, long, long, long time. Finally we were On and off to another check near the lake. Here Bloody Lips got us again as we headed south to a long false. The actual trail went over the river to, you guessed it, another check. I found this one and we ran to another check at Columbus and Grand. I didn’t see trail again until I stumbled onto the eagle trail near the finish. I started running it backwards until I saw Rhotan coming in the other direction. Having already run part of the eagle trail, I took the turkey On In.

I had run all over the River North area looking for trail. At one point I ran into Meister, also lost. Meanwhile the pack was drinking beer at the orgasm over the river fountain. Sounds like I missed a good beer stop.