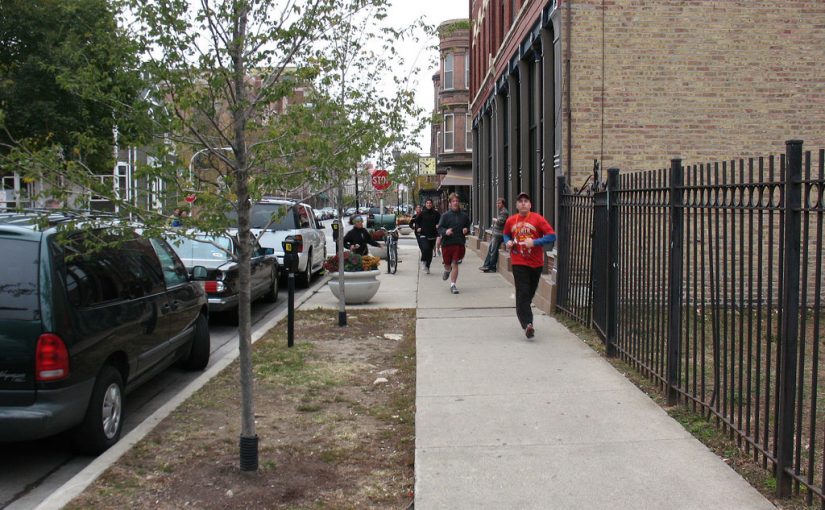 Lower Wackoff and Canned Pussy decided to put together a little hash from Little Rascals to celebrate ten years of hashing each. I think they each laid ten minutes worth. This was definitely the quickest hash I ran all year. It took about 30 minutes to get to the beer stop.

We headed south from the bar and at the first block we had our second split already. I saw track and followed several hashers toward the east. Another split and there was only Fist And Clits still in front as I headed towards the tracks. She eventually found the trail and led to a T n E split up onto the track. We headed up and I finally found marks that led right down to another split. I picked south and I got lucky again. But the usual FRBs and our visitor, Dr. Who, soon passed me as headed to Pulaski and Diversey. The trail kept going to one block west and a check at an alley. I saw Lifa returning from a false to the south, so I headed back to Diversey and further west. I was On. I hit another split and went straight while Rhotan went right. He was on so I headed north to catch up. Rhotan missed a hidden turn mark and I was back in front to the next check. I headed west and found two marks, but I couldn’t find a third. So I headed north and found myself paralleling Lifa who was On. I looked and there was another mark and I led us up to the tracks. Heading south we were soon back on the street at Belmont. There was a big loop into a deadend parking lot and I found the mark coming out. But I couldn’t fine another. While looking, I spotted the walkers at Canned Pussy’s garage and I was soon there for the beer stop. I apparently missed a short three block loop and soon the pack started to arrive.

From the beer stop it was a short run back to the bar and the free hot dogs. Too Loose To Screw led us in a short circle giving the hares a well deserved down down for such a short trail.